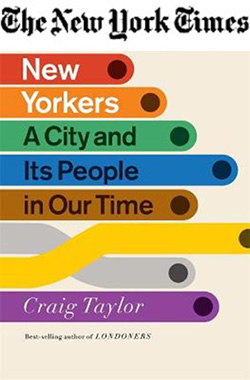 Before reading a word of Craig Taylor’s "New Yorkers," I decided to construct a dramatis personae to keep track of the characters in his intriguing oral history. My can’t-tell-the-players-without-a-scorecard hunch was borne out after only a few pages, when I read that he had conducted long interviews with more than 180 New Yorkers, filling 71 notebooks and nearly 400 hours of audio recordings. Wow.

Thankfully, "New Yorkers" is not “War and Peace,” with its several hundred characters. Taylor culled and cut a lot. But among those who made it into “New Yorkers,” some are unforgettable: the “healer” who “cleared” an apartment in Trump Tower on Election Day, 2016; the National Park Service guard who calls the Statue of Liberty his work wife; the personal injury lawyer who suggests that Taylor fall on the sidewalk and sue the city; the die-hard Mets fan who asks if Mrs. Met’s compensation is equal to Mr. Met’s and wonders about Mrs. Met’s decades-long disappearance from public view. “Probably because she got pregnant,” the fan concludes dryly.

My notes were like that — funny, sort of — until they were not. In Taylor’s New York, even the seasons can be oppressive and oppressing. There was the police officer who says summers and winters in New York are brutal. He also says fall can be brutal. And spring? "Usually nice but can be brutal." And there was one of Taylor’s main characters — Joe, a homeless Vietnam veteran who was hit by a mortar during the war. He says that New York “isn’t a real place.” New York means to be compassionate, but Taylor realizes that it can be a place that falls short: "I was often unable to refrain from reaching out and offering optimism."

Taylor is the latest in the parade of people who have written about New York but are not from the city. (Neither am I, if it matters.) He is a Canadian who moved to Britain in 2000 and, in 2011, published his third book, "Londoners," also an oral history. If you can judge a book by its subtitle, "Londoners" was hard to top: "The Days and Nights of Londoners Now — As Told by Those Who Love It, Hate It, Live It, Left It and Long for It." The subtitle of "New Yorkers" is almost as generic as a Duane Reade: "A City and Its People in Our Time." Happily, "New Yorkers" is livelier than that. Much livelier.

Arriving in New York in 2014, Taylor set out to listen. He quickly realized that listening in New York "is more like feeling sound surge past." Some of what surges past makes you cringe. Someone told him to cut "The Power Broker" into three sections for portability — literally where to rip apart Robert A. Caro’s classic, first at Page 359, then at Page 828, leaving a final chunk through Page 1,162, although the notes and index fill another 100 pages or so. It had been years since I had thought about a 10th-grade English teacher who, on the blindingly bright morning of the first day of the term, suggested a similar strategy for Dickens and Dostoyevsky. By lunchtime I had arranged a transfer to a different class.

What also surges by, and rightly makes Taylor more than uncomfortable, are displays of wealth in a city that has gone beyond "gentrification." The mega-rich do not care what it costs to satisfy their demands: Taylor tells of a personal assistant who called NASA to find out whether the material from the heat-resistant tiles on the space shuttle could be used on a kitchen countertop in Manhattan — and offered to pay the school fees for the NASA contact’s children. This, for a countertop in a kitchen where no one cooked. The obvious takeaway: It is a money city, far less friendly to working-class and middle-class people than it was a generation or two ago.

Taylor opens "New Yorkers" with an ode to what he says New Yorkers always want — more. More of everything. More life. He is right. He also says New Yorkers are more prone than people elsewhere to talk about themselves. Well, I used to have a cat I called More, short for Sir Thomas More, named (along with his brother, Erasmus) by a more erudite friend. I could say more about More, but having proved Taylor’s point about “the mere speck of time” it takes New Yorkers to go off on personal tangents, I will move on.

In New York, much of what surges by is unexplained, including basic questions like who is a New Yorker. It is tempting to bend Justice Potter Stewart’s famous line and say that I know a New Yorker when I see one. Or to expand on the definition proposed in a letter to the editor printed in The New York Times in the 1980s: "A New Yorker is a guy who lives, and lets live." A New Yorker puts up with everything that is wrong here — inherent inequality, inherent racism, maddening inertia, even sheer cantankerousness — but still finds it alluring. Like Dorothy Parker, most New Yorkers have toyed with living elsewhere, only to have "the sharp picture of New York at its best" come to mind and decide that “it is always better than I thought it would be.” . . . .