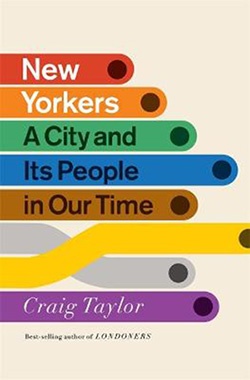 I find it very hard to be in Manhattan. I don’t like going into Manhattan at all, which is ironic because to me the whole point of living in this area is because you’re close to Manhattan. I stay here in Brooklyn because I feel I can help the city a lot by being here. And then there are different areas of Manhattan that feel worse than others. Midtown is very hard to take. It’s so intense. To me, and I assume everyone does this, because it seems very natural: imagine feeling the energy of every person. And buildings have energy and then you have all the cars coming through and people people in the cars. It’s just too much. It doesn’t feel good. It makes me feel uncomfortable, irritated, and that tired, I usually have to go home and lie down.

One of the things I do is space clearing, so I really feel all of the energies in a building. When you go into a building there is a lot of energy there from all the people who have been there. There’s also energies coming in from outside. There’s also – I know it sounds like a movie – but there are nonphysical beings who are there. Those are the ones who cause the most problems for people, I think. All of this effects everyone, they just don’t know what. Which is why after a space clearing, when all of that energy is cleared and a tremendous amount a positive, sacred, blessed energy is brought in, everybody in the space feels so much better. If it’s a workplace they get more done, they get along much better, they’re much happier in a space. It completely changes the environment. You go from being a really negative low-vibration environment, not great, to being a high-vibration environment with no negative energy at all.

NEW YORK IS a small island, it’s crazy. It’s like Gilligan’s Island being built up to the biggest city in the world. There’s so many EMF’s. There’s so much technology, so much electro-smog, everything that’s plugged in creates electro-smog, and cell-phone towers and computers and Wi-Fi. All of this makes you physically weaker. Which makes you more susceptible two getting sick. It’s everywhere, but in Manhattan it’s so intense. I only go into Manhattan now for work. I protect myself energetically. If I’m in a place that feels terrible to me, I just clear it. That’s my way of dealing. If I get on a subway car and it feels awful, I clear it.

I get to see people’s houses, gorgeous places in New York, which I love. There was an apartment on the Upper West Side, all the way on Riverside Drive, which these people called me in to clear. It would have been this really gorgeous old prewar apartment with twelve-foot ceilings, and all these rooms, and all of this detail, because I could see what it would look like when it was fixed up. There had been a terrible fire there, really bad, two people got killed. The guys who were in there fixing it up — they had to completely do everything over — they refused to work because they felt something there and it made them feel really bad and creepy. And they thought something’s there, whether the souls of the people who died in the fire, I don’t know. They wouldn’t continue working until the owner or the realtor, whoever, brought someone in to clear it.

They called me and I cleared it. That was my favorite because I could see what that apartment would look like when it wasn’t fire damaged.

I do this for people who are trying to sell their place or just want their home to feel better. A sense that something’s not right, or they’re familiar with space clearing so they want it done because I know the benefits of it.

I do this a lot for realtors when they have a space they can’t sell. And then it usually sells very quickly. There was this one apartment a few years ago, it was beautiful, a duplex, with a terrace and a whole wall of windows on both floors. It was on and off the market for seven years and it wouldn’t sell. A realtor brought me in and I cleared it. As I was doing the clearing the realtor got nauseous, which is because she needed healing, for one, but also because the vibration of the energy changed so much so quickly. She couldn’t adjust fast enough.

That doesn’t happen very often. But when all this positive energy came in so quickly it probably created something in her body, maybe her equilibrium, and she was nauseous. She went out into the hallway. She had scheduled someone to look at the apartment right when I left. They bought it. It sold fifteen minutes after the clearing.

Someone walks into a space, they have an immediate reaction. They feel like, Oh, I like this. Or, I don’t like this. They haven’t even looked at it. It’s because they’re reacting to the energy of the place. When I do this for realtors and you get rid of the negative energy and the low-vibration energy, they go into the place already liking it. This apartment makes me feel good.

It’s basically a four- or five-step process. First I go in and out of every room. It looks like I’m just walking around mumbling to myself. I don’t put on a big show, like they do on TV. I wear the same thing all the time: khaki pants and a white shirt. I used to wear a lot of necklaces with symbols on them, but I don’t do that anymore. I just protect myself from the EMFs.

I go into every room and I’m talking to the higher energies. Any negative entities, any low-vibration energy. There could be beings who aren’t in body anymore but are still hanging around. Or they could be worse, but I don’t really like to talk about those. But they do exist. There are creepy things. I don’t like to dwell on that because it’s just kind of sensationalization. I don’t want to feed into that. There are creepy things out there.

There were a couple times when there were super creepy things that if I didn’t know what I was doing, I could have been in trouble. These really negative energies feed on fear. You feel them. They feel horrible. I don’t see, just feel it. I’m almost glad I don’t see it. It feels so horrible. It’s very easy to go into fear. It would scare anybody. Sometimes you feel it right when you go in and as you go through. Sometimes it feels so bad in a place, in an entrance way, I do a general clearing.

Those old buildings that used to be tenements? Terrible energy. More of them are getting cleared. Those places — when people came here, immigrants, there was a lot of hope for something new, but the primary feeling was fear, desperation, being uprooted from your home, a lot of them fleeing. It was just horrible. The conditions were so horrendous in those areas. Those tenement houses, if they haven’t been cleared, they just feel terrible.

It’s amazing how the universe works. I have a friend who works as a nanny. The family she works for has places all over the world. They’re one of the wealthiest families in the world. She told the wife and mother about what I do, and she wanted to get it done, but it kept getting delayed. It kept getting put on the schedule, and then getting taken off. I was getting a little annoyed. She says that she wants it. I know that it’s going to be a good thing for her and her family. Somehow, my friend got her to commit to a day. And I went, and had no awareness of what day it was.

Of course, there was a little miscommunication getting me the address. I finally get the address, and I still had no idea. I just had the number and the street. Then I get out of the subway, and there’s a lot of press vans. I still am thinking nothing, because this is New York City. This is in Manhattan. I’m like, Oh, something must have happened. Then there’s cops. Then there’s crowds of people. I’m just looking around, I’m looking up. I’m like, As long as we’re all safe here, this is okay.

Then I get to the building. I still don’t know what building it is that I’m going to. There’s secret service guys all over the building, and there’s people taking selfies, and videos. There are reporters talking into cameras, and guys in black suits, with black sunglasses, and a thing in their ear. “What is this?” Then I’m looking for the entrance to the building. And it’s Trump Tower. Then I’m like, Oh my God. It’s election day. I had no awareness that it was election day. It was the primary. It was the New York primary.

So I went in. It’s funny in these buildings. The guys on the elevator, they’re very chatty, and they like to talk.

“This is Trump Tower, right?”

“Oh, yeah. He’s upstairs right now. That’s why all the press is here.”

When I got out of the elevator, the elevator guy was like, “He just lives two flights up,” from where I was doing the clearing. When I got into the apartment I said to my friend, “Did you make this connection that I just made this second that I’m doing an energy clearing right below Trump’s apartment on election day?”

She’s very spiritual too, and so she was like, “This is so meant to be. You so need to be here today.”

I did the space clearing, a blessing for their apartment. I felt like it wasn’t an accident that I was there. Nothing is really an accident, but that was really not an accident. So, maybe I’m intended to just facilitate some light coming into this building, and to him.

But I didn’t want to give him enough light to risk any kind of success in the election. That was where I had my boundaries. God forbid. I did send some light up to him. Apparently his apartment was in the same line. It was literally two flights up from where I was standing.

I think I was there to bring healing to the building, to him. Maybe he could be a little less full of spewing hatred, maybe a little less divisive. Who knows? I was like, Okay, I’ll send light up there. But not enough light for him to win. That was my deal with the universe. But the universe does what it wants.

Excerpted from New Yorkers: A City and Its People in Our Time by Craig Taylor. Copyright © 2021 by Craig Taylor. With permission of the publisher, W. W. Norton & Company, Inc. All rights reserved. This selection may not be reproduced, stored in a retrieval system, or transmitted in any form by any means without the prior written permission of the publisher.